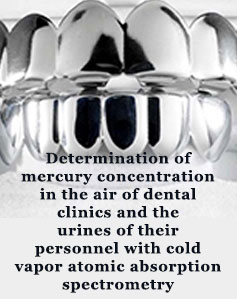 Background: Dental clinics are known to be one of the largest users of Toxic inorganic mercury. It is well documented that dentists and dental assistants who work with amalgam are chronically exposed to mercury vapor. This study investigates exposure to mercury vapor in a dental clinic. Methods: GBC cold vapor atomic absorption spectrometry (AAS), using sodium borohydride as the reducing agent, was employed to determine mercury concentrations. The determination of mercury in urine and air was carried out using a flow injection system after sample treatment according to the standard procedure. Result: In this study mercury exposure in some dentist and dental office personnel was examined. We studied 495 persons (280 dentists and 215 dental personnel) occupationally exposed to mercury while working at 58 dental clinics in Tehran. In addition 305 samples from dental office’s air were taken and their mercury was measured with HG-AAS. Conclusion: In this study, mercury levels in dentists urine and dental office atmosphere were lower than occupational safety and health administration (OSHA). Results acquired from this study show that the amount of mercury were in normal range and it is lower than to the potential for adverse exposure to elemental mercury vapor concentration in a dental office.

Urine sampling: 24-hour urine samples were obtained from dentists and their colleagues who had several months of steady exposure, at the end of a working week in 2.5 lit. polypropylene sampling vessels and after the addition of conc. HCL to yield a final acid concentration of 1-3% v/v were stored at -20°C prior to analysis.

Air sampling: All samples were collected in an employee’s breathing zone according to OSHA analytical method. Each personal sampling pump was calibrate with a representative sampler and the end of sampler was broken immediately prior to sampling. Samplers were attached to the pumps with flexible tubings and air was colleted at a rate of 0.15 to 0.25 L/min

Publisher:AMECJ publisher with the License number of 83095 From the Ministry of Guidance, Iran. To see the Certificate please click here.