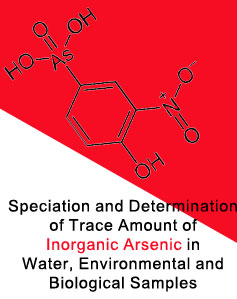 Anew speciation and preconcentration method based on dispersive liquid-liquid microextraction has been developed for trace amounts of As(III) and As(V) in urine and water samples. At pH 4, As(III) is complexed with ammoniumpyrrolidine dithiocarbamate and extracted into 1-Hexyl-3-methylimidazolium hexafluorophosphate, as an ionic liquid (IL) and As(III) is determined by electrothermal atomic absorption spectrometery (ETAAS). Arsenic(V) in the mixing solution containing As(III) and As(V) was reduced by using KI and ascorbic acid in HCl solution and then the procedure was applied to determination of total arsenic. Arsenic(V) was calculated as the difference between the total arsenic content and As(III) content. The effect of various parameters on the recovery of the arsenic ions has been studied. Under the optimum conditions, the enrichment factor 135 was obtained. The proposed method was successfully applied to the determination of trace amounts of As(III) and As(V) in water and biological samples.

The financial support of this work by K. N. Toosi University of Technology and Semnan University Research Council are greatly acknowledged.