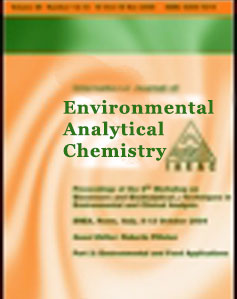 A sensitive and simple method has been established for simultaneous preconcentration of trace amounts of Pb (II) and Ni (II) ions in water samples prior to their determination by flame atomic absorption spectrometry. This method was based on the using of a microcolumn filled with graphene oxide as an adsorbent. The influences of various analytical parameters such as solution pH, adsorbent amount, eluent type and volume, flow rates of sample and eluent, and matrix ions on the recoveries of the metal ions were investigated. Using the optimum conditions, the calibration graphs were linear in the range of 7–260 and 5–85 μg L−1 with detection limits (3Sb) of 2.1 and 1.4 μg L−1 for lead and nickel ions, respectively. The relative standard deviation for 10 replicate determinations of 50 μg L−1 of lead and nickel ions were 4.1% and 3.8%, respectively. The preconcentration factors were 102.5 and 95 for lead and nickel ions, respectively. The adsorption capacity of the adsorbent was also determined. The method was successfully applied to determine the trace amounts of Pb (II) and Ni (II) ions in real water samples. The validation of the method was also performed by the standard reference material.