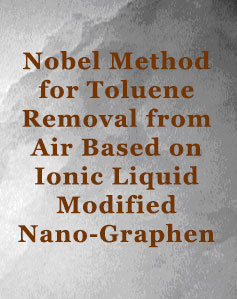 the aim of this study was to investigate the removal of toluene from air through Nano-graphene modified by ionic liquid (NG-IL). The batch adsorption experiments in glass bottle of gas chromatography equipped with flame ionization detector (GC-FID) were used. Graphene ultrahigh-quality synthesized by substrate-free gas-phase method in a single step and graphene sheets were deposited with ionic- liquid by thermal adsorption in acetone blank solution. Various conditions including contact time, amount of adsorbent, adsorbate concentration, humidity, and temperature were studied and optimized. NG-IL adsorbent was used for the adsorption of toluene vapor from gaseous media and the effect of different conditions such as; toluene concentration, humidity, and temperature on the adsorption were investigated. The Langmuir adsorption isotherms were employed for toluene by NG-IL adsorbent. The adsorption capacity was decreased by raising the sorbent humidity above of 50 percent. The toluene capture capacity for NG-IL was 126 mg/g. The results of SEM, XRD and TEM showed that the NG-IL have beneficial surfaces for toluene removal. NG-IL as a novel adsorbent has not previously been used for the adsorption of pollutants.

The authors are thankful to the Iranian Occupational and Environmental Health Laboratory of IPIHRIEHRC, PIHO, for their support for this work. The authors declare that there is no conflict of interests.